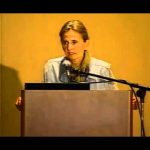 Geoff Brady, longtime UFO Investigator talks about his experiences and what he’s captured on video of UFOs some of which actually try to mimic the appearance of other aerial objects. […]