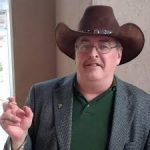 Dr. Joseph P. Farrell talks about The Cosmic War involving what amounted to a Civil War between “Gods” which in actual fact were a race of highly advanced Extraterrestrials. The ETs fought over an advanced weapons system that had Planet Busting Capabilities. In Part 1 Dr. Farrell talks about the basis for his thesis that long ago a cosmic interplanetary war occurred. Dr. Farrell talks about Dr. Thomas Van Flandern’s “Exploded Planet Hypothesis” and the possible physics behind this Planet busting weapon.

About James Bartley James Bartley discusses the persistent meme that “there are no aliens its only military.” James puts the kibosh once and for all on this silly notion. The only way people can arrive […]

In the latest segment of Bartley’s Commentaries on The Cosmic Wars, James discusses Pig Brains brought back to life, The Golem, Graphene’s role in Regenerative Medicine, Stem Cell Research in connection with Regenerative Medicine and Ultra High Frequencies used to send chemicals, medicine and many other things into Human Bodies. All this relates to a possible Graphene Golem Outbreak i.e. a Zombie Apocalypse. […]