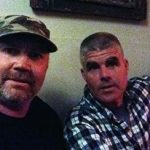 Hugh Newman and Jim Vieira co-wrote “Giants on Record: America’s Hidden History, Secrets in the Mounds and the Smithsonian Files” 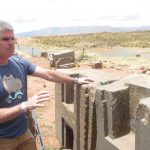 Jim Vieira’s Bio: Stonemason and historical detective, Jim Vieira, discussed the ceremonial stone structures of North America as well as how the archaeological evidence for giants in America has been covered up.” There are structures of earth and stone, thousands of years old, in every part of the United States,” Vieira marveled. While he has found over 10,000 stone mounds around Massachusetts alone, he lamented that many great works were dismantled during colonial times as settlers used the materials for their roads and bridges. For instance, Vieira cited an archaeologist’s report of a 55-foot high stone pyramid in Illinois that had been plundered by colonists, who removed “tens of thousands of cartloads of stone.”

Regarding giants in America, Vieira explained that, while searching through old town histories in Massachusetts for information on stone structures, he stumbled upon remarkable accounts of anomalous human skeletons being discovered. According to the reports from the time, the skeletons ranged from 7 to 11 feet tall and had skulls which sported double rows of teeth. “There are thousands of these accounts,” Vieira said, “by doctors, scientists, anthropologists, archaeologists, farmers and over decades and decades of time all around the country.” These skeletons, he added, were often found within the mysterious stone mounds and, sometimes, were sometimes buried amongst great treasures. 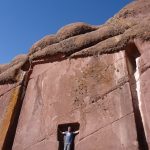 Vieira attributed the suppression of information on the ancient American giants to the Smithsonian Institute, specifically their first director of anthropology Ales Hrdlicka. Described by Vieira as a “pre-Nazi eugenicist,” Hrdlicka allegedly censored reports of giants and marginalized them from the historic record in order to depict Native Americans as “unsophisticated and uninspiring.” Additionally, Vieira reported that there are many accounts of Smithsonian representatives traveling around the country to where these anomalous remains were discovered and “taking the giant skeletons away, never to be seen again.” Ultimately, he contended that the cover up continues to this day and claimed that a video presentation on his findings was pulled from the Internet because it threatened the scientific orthodoxy. 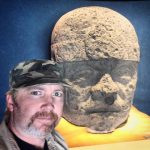 Hugh Newman’s bio: Hugh Newman is a world explorer, megalithomaniac and author of Earth Grids: The Secret Pattern of Gaia’s Sacred Sites (2008); co-author of Giants On Record: America’s Hidden History, Secrets in the Mounds and the Smithsonian Files with Jim Vieira (2015), and is published in three ‘Ancient Origins’ e-books. He has been a regular guest on History Channel’s Ancient Aliens and Search for the Lost Giants and has been on the BBC, Sky TV, Bosnian TV and is currently involved in Megalithic Odyssey (UK), Road 2 Ruins (US) and Ancient Tomorrow (US) documentary projects.

He has articles published in Atlantis Rising (US), New Dawn (Australia), Nexus (UK/AUS), Mindscape (UK), Heretic (UK), World Explorers Magazine (US), The Circular (UK), The Leyhunter (UK) As well as organising the annual Megalithomania conferences and tours, he co-organises the Origins Conference in London with Andrew Collins and has spoken at events in the UK, Malta, France, Peru, Egypt, Bosnia, Cambodia, Java and North America. He currently lives in Wiltshire, England. 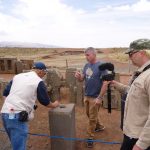 In Part 1 Hugh Newman and Jim Vieira talk about Giant Skeletons that have been found and documented in North America and skeletons over seven foot tall found in Indian Burial Mounds. Hugh and Jim also talk about the connection between Megalithic Sites and the legends and myths about Giants. Hugh and Jim also talk about the Younger Dryas Impact Event which precipitated a global cataclysm and how prior to the Great Flood Giants and Little People walked the land.

In Part 2 Hugh Newman and Jim Vieira talk about an Advanced Ancient Civilization where humans, giants and little people co-existed, Edgar Cayce’s take on Atlantis, Elongated Skulls found throughout the world, mystical experiences at Megalithic and Sacred Sites and the next generation of archaeologists and megalithic researchers who go where the evidence leads them.

Lea Kapiteli, Author, ET Contactee and Artist, talks about her ET experiences with a variety of different ETs. Lea was mentored by a higher dimensional ET who took her on an Astral Voyage to a planet in the Pleiades system. […]

Gary Wayne, author of “The Genesis 6 Conspiracy” joins us at The Cosmic Switchboard Show to discuss Giants, Fallen Angels and End Times Prophecy. […]