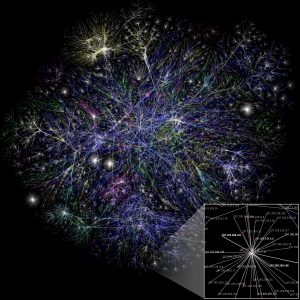 As you may or may not know Obama is ending the U.S. department of commerce’s oversight of ICANN which control’s the internet’s root dns zones with a possible U.N. takeover in the future. The root zone translates names to numbers. For example if you type thecosmicswitchboard.com into your browser, the root zone translates it into 107.170.220.125. Without the root zone it would be extremely difficult to remember more than a few website addresses and with IPv6 with the ip addresses increasing in length to something like 2001:db8:85a3:8d3:1319:8a2e:370:7348 it would be impossible to remember any web site addresses, unless of course you were a machine.

By ceding control of the internet to a group like the U.N. political differences between countries can cause mismanagement of the root zone causing it not to function properly making it difficult for humans to use the internet and bringing the internet into a new era where the internet is for the exclusive use by AI and not humans.

The internet was created at DARPA as a means to bring a malign intelligence into existence that could not exist without an extensive artificial info structure.

The progress that we made from the information revolution that the internet brought was an acceptable loss at the highest levels in order to bring an A.I. hell into existence.

If you look at the architecture of the internet, the internet looks more like a neural net than anything else. With computers and servers acting as neurons and the fiber optic cables acting like nerve fibers. This info structure is even bathed in wifi radiation which creates artificial brain waves. The goal of creating the internet was to encompass the earth in an indestructible neural network that would create a medium for an artificial intelligence to quickly grow, evolve and subjugate humans. Think about the vast amount of resources available to AI on the internet. An artificial intelligence would have access to banking records, phone logs, any published scientific papers, blogs, facebook profiles, scanned books, gps data from cell phones and much more. An AI on the internet can evolve infinitely faster than one on a stand alone system, even one with sensors in the real world. In fact, the internet is probably necessary for an AI powerful enough to subjugate us to evolve.

With the explosion of cameras and the coming “internet of things” we are giving the AI hands and eyes in the real world and not just in cyberspace. With nano technology we are giving AI control of our bodies, and with genetic engineering we are handing over control of our genes to the AI.

Right now humans (how ever evil they are) are still in control. The AI hell is still in the future so it is not too late to change things. Some technologies necessary to bring the AI hell into existence are not complete yet and are being worked on in secret and corporate labs around the clock. We must protect our planet and our species and prevent this upcoming AI hell from being completed because once it is unleashed there will be no turning back. If the people who served the AI think that they can control their AI they will be sorely mistaken because they will be the first ones turned upon because they will be the greatest threat to the AI.

While we may not notice any immediate difference in our life from Obama’s ceding control over the internet root zone, it signals the start of a new era where humans are no longer the masters of this planet, and where AI reigns supreme. We need to turn back before it is too late and the pandoras box containing the AI hell is opened.

James Bartley discusses the alleged Marine Corps attack on the CIA Headquarters of Langley. He also talks about the potential for a false flag or sabotage to be used as a pretext for war with Iran and the vulnerability of the U.S. Carrier Battle Groups in the Persian Gulf. James also talks about the Archontic Overlay behind the Transgender, A.I. and Depopulation Agenda which David Icke recently spoke about. […]