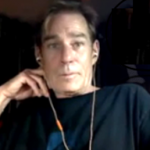 Randy Maugans is a long time radio talk show host, producer, and writer, working in the fields of religion, politics, and the paranormal. Randy has an interest in the esoteric, paranormal and occult stems from early life experiences, which fueled his quest to understand the complex issues of the phenomena of UFOS and ETS, as well as exploring the black operations, mind control programs, and esoteric arts behind a global conspiracy of soul harvesting. His training in Christian ministry has transitioned into a spiritual approach to the supernatural, paranormal and covert operations; and in 2009 he created OffPlanet Radio expand the scope of his research and presentation.

Randy Maugans, veteran investigator and one of the pioneers in the conspiracy and UFO/MK Milab Genre of radio and internet Talk Shows, discusses the A.I. Agenda, The Hive Consciousness, the Transgender Agenda, Bitcoin and much more. This is a fascinating and thought provoking interview with one of the leaders in the field of conspiracy and paranormal investigative research.

Randy Maugans talks about his own experiences with Non-Human Life Forms, Miraculous Escapes and involvement with deep black military operations as a Project Person and Milab.
Randy is extremely gifted and had undergone testing and training from both non-human life forms and deep black elements of the military.

Randy Mauganus also talks about how alot of what people think are not their own thoughts but thoughts installed by the matrix control system that we live in created through social engineering, tv, pharmaceuticals and recreational drugs which gives us a fake freedom in order to create a hive mind system.

Randy explains bitcoin, how it works and what the block chain is. Randy also talks about how bitcoin is not functioning how it was originally intended to function in the satoshi white papers because of wild speculation.

In Part 2 Randy Maugans talks about his own personal experiences including Milab/Project Type Experiences. This is a fascinating, enlightening and thought provoking interview.

In a Supplemental Commentary for the Members, James Bartley talks about the implications of the Eisenhower meeting(s) with ETs, the Nuclear Connection to ETs, Sandia Base and much more. […]

James Bartley on the Esoteric Messiahs

James Bartley talks about the “Esoteric Messiah/Esoteric Evangelicals.” These are people in the UFO/Esoteric/Truth community who use a lot of esoteric jargon sprinkled with hot button topics such as aliens, A.I.,The Matrix etc who are going around malignly influencing people through an endless barrage of talking points. These Esoteric Evangelicals are a walking talking infomercial. The idea is to convert people to their way of thinking. […]