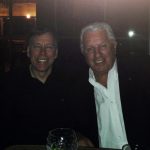 Jim Goodall, a world renowned expert on the SR-71 Blackbird, the F-117 Stealth Fighter, Nuclear Submarines and Area 51 discusses what he has learned from his sources after more than sixty years in the Military Aviation and Aerospace field. Jim knew the late Director of Lockheed “Skunk Works” Ben Rich personally. Jim relates a fascinating discussion he had with Ben Rich shortly before Ben Rich died. Jim Goodall knew Bob Lazar personally in fact Jim knew Bob Lazar BEFORE Lazar joined the alien propulsion back engineering program at Papoose Lake/S4. Jim vouches for Bob Lazar and relates an interesting story of how he personally confirmed Bob Lazar’s employment at S4 with a copy of Lazar’s W2 form during a visit to Naval Intelligence at The Pentagon.
In Part 2 Jim Goodall continues his discussion about Bob Lazar. Jim also talks about the revelations he received from other sources within the Deep Black Aerospace World. Jim has conducted a lot of field investigations over the years at the Tonapah Test Range (TTR), Area 51 and other places. In this exclusive interview Jim talks about a new place in the Desert where it is alleged super secret aerospace research is conducted. Jim also talks about the field investigations and UFO sightings he has had in the company of John Lear.
Jim Goodall’s Facebook: Jim Goodall

David Dunger, an IT Professional, podcaster, and UFO/ET Experiences who comes from a multigenerational family of Experiencers, discusses some of his experiences. On one occasion a doctor refused to remove an implant beneath the skin […]