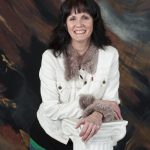 Geraldine Stith Sutton is the author of “Alien Legacy” about the legendary Kelly-Hopkinsville Kentucky ET Encounter which occurred the night of August 21st, 1955. Geraldine’s family members including her father, grandmother and uncle were directly involved. On the night in question, a family friend who was part of the group, saw a low flying UFO. Upon investigation, the family friend and Geraldine’s father encountered an ET with large eyes, long ears and arms that extended down to the knees. 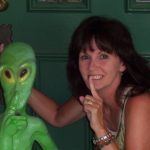 This alien has since been called the Kelly-Hopkinsville Hobgoblin. What followed was a running gun battle which lasted all night as the ETs seemed to want to gain entry into an isolated home in rural Kentucky. Geraldine not only describes what happened that evening but also describes the aftermath in which police and the military searched the area around the home. Military Planes flew over the area the next day and there were rumours that military personnel from Wright-Patterson Air Force Base became involved. Geraldine also talks about a similar type of being which troubled the Cherokee Natives as well as the extensive cavern and tunnel systems in this part of Kentucky.

In Part Two Geraldine Stith Sutton, the author of Alien Legacy and The Kelly Green Men: Alien Legacy Revisited” talks about information she received from a mysterious stranger who told her about the military’s activities in the days following the incident in Kelly Kentucky on August 21st, 1955 and how Wright-Patterson AFB may have been involved. Geraldine also talks about some of the Sasquatch activity in Kentucky as well as suspected underground military base activity in Eastern Kentucky.

Niish from The Cosmic Salon joins James Bartley at The Cosmic Switchboard Switchboard to discuss Nordic/White Genocide and its Off World Origins. This is a form of Galactic Proxy Warfare we are seeing play out on the Earth’s Surface. […]

Wake Up Call: Someone is knocking at the Door

Robert Stanley returns to The Cosmic Switchboard Show to discuss the worldwide anomaly on November 11th 2018 when an anomalous seismic event occurred which lasted for twenty minutes and was registered by seismic recording stations all over the world. Robert feels it is a Wake Up Call from the Benevolent ETs for Humanity to Wake Up from its Slumber and to finally throw off the shackles of this Cosmic Vassalage Humanity is currently struggling with. […]

Gary Heseltine returns to The Cosmic Switchboard Show to discuss the upcoming documentary about the Rendlesham Forest events also known as Bentwaters. This documentary will highlight Larry Warren’s role in the fourth night of events as well as the testimony of new witnesses who have come forward. The trolls and disinformation artists are foaming at the mouth but they cannot stop “Caple Green Rising.” […]