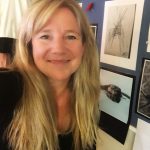 LeeAnn Carnegie grew up in Eastern Ontario. She had her first close encounter with at least one Sasquatch in 1988, while sleeping in a tent in the woods. Her second encounter happened in 2012, while berry picking alone deep in cottage country wilderness. This event was the ultimate paradigm shift that would change her life forever. She has spent the last seven years pursuing the truth of Sasquatch in various locations in southern Ontario. She has found very clear and defined footprints in eight differently areas, and has listened to hundreds of hours of their evening activity that she has recorded on audio. Her real passion is in the discovery and documentation of stick structures. For over three years, LeeAnn has felt emotionally and telepathically guided toward the finding of many of these beautiful and complicated structures. She feels that the visual awareness of these creations can act as a tool for spiritual awakening, and has the ability to deepen our connection to the Earth, to wildlife, and most importantly, to each other. She believes that these ancient Forest People are here to help awaken us to the truth of their existence, and to our collective history.

LeeAnn’s YouTube channel is ’Southern Ontario Sasquatch’ which can be found at: Sasquatch

This week James Bartley is interviewed by Dean. James Bartley brings a wealth of knowledge about some of his alien experiences as well as, artificial intelligence, dream scape, manipulation, Silicon Valley and more. […] […]