Andrew discusses The Gorebridge Scotland UFO Hotspot, The Fallkirk Triangle where many strange events are reported, Theosophy and the parallels between Fairy abductions of the past and modern alien abduction reports in the present. In the second hour he discusses witnessing the amazing powers of reptilian human hybrids, The failings of the Disclosure Movement and his response which was to start the Xenopolitics movement, and Agenda 21 in Scotland.

Andrew Hennessey, born 1957, Edinburgh, Scotland, has been interested in the UFO phenomenon from a very early age, having had many encounters and experiences, which he wrote of in his free ebook The Turning of the Tide. See http://www.andrewhennessey.co.uk/turningv6.pdf
Andrew was trained as an industrial biologist and worked in several labs including; the Institute of Terrestrial Ecology, Dept of Agriculture and Fisheries,  Central Microbiology Lab, National Museum of Antiquities, East of Scotland College of Agriculture, British Geological Survey.
In 1984 Andrew formed his Theatre group called the Solan Company putting together various original Grailquest projects in many styles with a veritable army of talented helpers.
His current music projects include his ceilidh dance band the Wild Geese  and on recordings for Blues and Country albums on the Scottish scene. 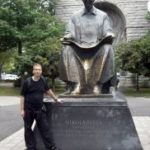 As an amateur Scientist he has also conceptualized new scientific advances. e.g. artificial general intelligence, a new model for gravity, cosmology and particle physics, a new kind of game theory and a new kind of systems theory.  He was listed on the Dissident Scientists list by the Jean de Climont Associates in 2012, 2014, 2016.
His latest Book is Alien Encounters and the Paranormal